To archive to DVD or hard drive or both?

My backup needs at work and home may be a little more than the average computer use. Each day I generate a few hundred megabytes of digital audio & video files. My wife is a photography nut (currently shooting a Canon 40d).

Previously the backup strategy was to burn the material to recordable dvd's and store them in a safe. Even though the speed of dvd burners is now 18x+, it still takes quite a while to archive onto 3 or 4 dvd's every couple months. Then I thought, with the prices of hard drives being so low, wouldn't it just make sense to backup everything to a $130 500 gig external drive? That's how I mirror my main audio/video work station. I was using an Icy Dock MB559 eSATA external enclosure ($60) with a Samsung 500 gig drive ($100). It works great and is just as fast as an on board sata hard drive. The only issue is you have to buy caddies for each hard drive you want to use ($20).

That's great for day to day, but what about permanent archiving? Is a hard drive fine? Well, an event last month made me reconsider moving entirely to a hard drive based archive system. One of the drives I was using to backup my wife's pictures died. It was a western digital mybook 300 gig drive. It just stopped working and would lock up any machine I connected it to. Thankfully my strategy also included burning dvd's with the same content. The hard drive is so much faster to write and read from than a dvd...but hard drives fail. Yes, dvd's can fail too, especially if they're not handled carefully.

Going forward I plan to still use an external drive for quick access to archived stuff as well as burning irreplaceable things (family pictures, etc.) to recordable dvd's. A new product from Thermaltake has made it even easier. 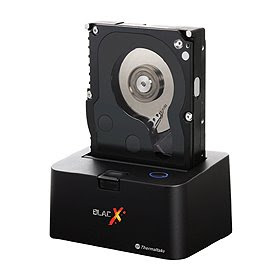 Now, instead of having to put a hard drive inside an enclosure to access old archived stuff, I can just pop the hard drive inside the Blacx (roughly $35 to $45). The original version is USB 2.0 speed (model N0028USU) and in use it operates as fast as the fastest external usb drives. They have another version with eSATA connection (Newegg and Buy.com have it in stock, model # ST0005U). I bought one of each and have found the eSATA to be roughly twice as fast using the same hard drive.

For the important audio & video, I plan to have two hard drive backups of material. I fill up about 500 gigs in a year, so buying an extra drive each year to help keep things safe will only set me back $120 or so.

Years ago I had a system hard drive fail. It took me two to three days to get my system set up the way I had it before. Over the past five years I've been using Acronis True Image to make a system backup a couple times a month to a separate hard drive. Now if my system drive fails, it should take me under an hour to install a new drive, use the image to re-install windows and be back on my way. Sure a lot better than having to reinstall windows & all the software that makes my studio run.

So that's my backup strategy, what's yours?
Posted by Sean Caldwell at 10:54 AM No comments: